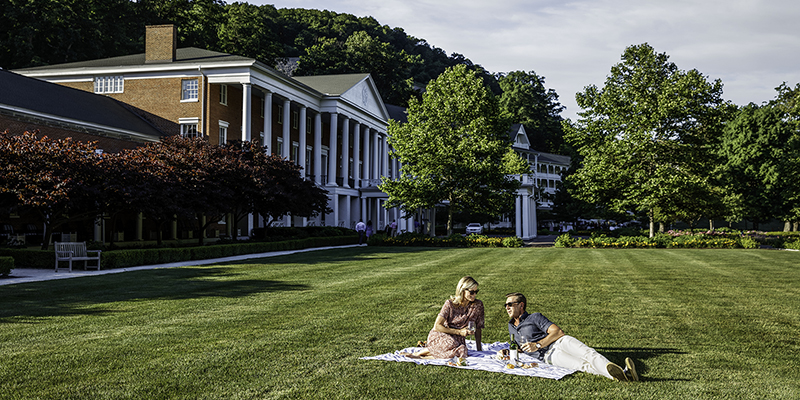 Bedford was founded in 1758 as a British defensive outpost in their battle against the French. Over 250 years later, the town’s strategic position remains its greatest asset. Situated in south-central Pennsylvania along the Juniata River and at the nexus of two major highways, the lively town is a place where residents and visitors alike can soak in a mineral spring, sip on a cold-pressed juice, spend the afternoon on a hiking trail, explore the charming downtown, or pursue a job at a thriving local company.

When you’re ordering up that fresh juice — and pondering pairing it with a poke bowl or hot panini — the person on the other side of the concrete counter might be Haley Feaster. She is a partner at Next Door, a buzzy cafe and market on East Pitt Street. 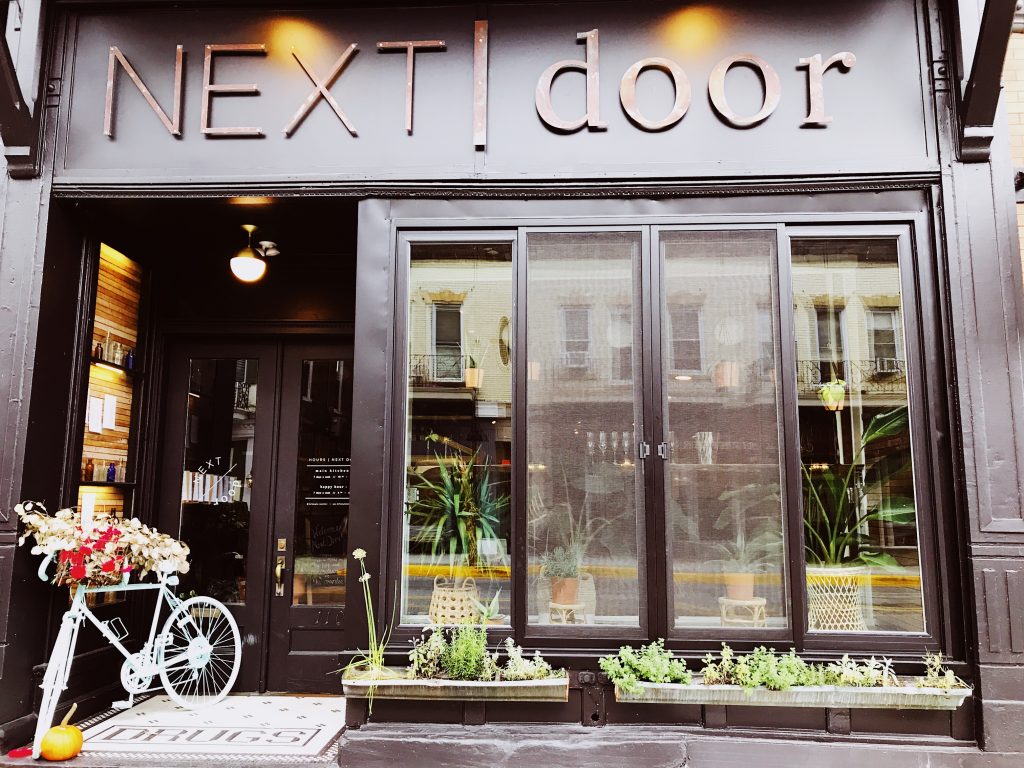 “I was born and raised in Bedford,” says Feaster. “I graduated from high school, went to school in North Carolina, then got a job in Washington, D.C., doing nonprofit and political fundraising. About two years ago, I was craving something more creative. I took some time to figure things out back home. I thought it going to be a few months of soul searching, but I fell back in love with my hometown.”

In high school, Feaster worked at Lifestyle, a small downtown market specializing in imported Italian goods that has evolved into a weekend trattoria. She developed a rapport with Stefano Ferrari, the owner and a Milan native. That existing relationship led to this current opportunity.

“About two years ago, the space right next door became available and we decided to take a chance,” she recalls. That “we” includes partners Mallory Pachtman, Stefano and his brother Davide Ferrari. “The timing was just right for everybody. The thought process was to offer fast casual, sustainable, healthy options. We do breakfast, lunch, brunch, and then special events in the evening.”

Next Door also strives to be a community hub for the young, creative residents of Bedford, offering crafting classes and pop-up events. Along with their latte — made with beans from La Colombe in Philadelphia — customers can pick up small-batch artisan food items, locally-made candles, or house plants from Feaster’s side business Deep Rooted.

“I think we have a really beautiful blend of locals, especially during the week, and we see a lot of tourists coming through on the weekends,” she says. “There are days that I don’t know anyone — and in a small town, you know a lot of people.” 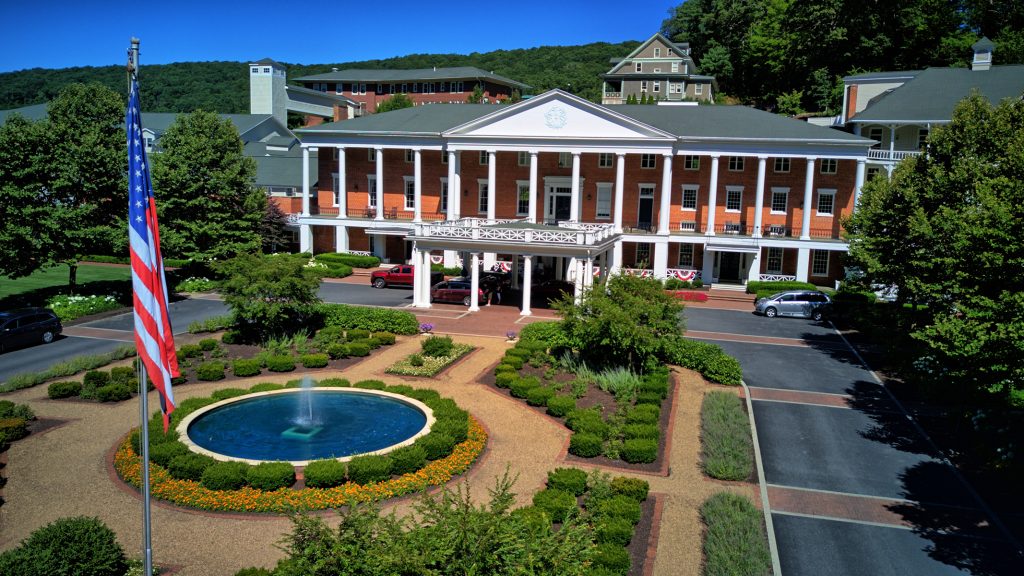 Much of that tourism is driven by the area’s natural mineral springs, which have drawn visitors for centuries, including Thomas Jefferson, Aaron Burr and George Washington. In 1804, a 24-room inn opened, catering to travelers interested in a good soak. That small enterprise has evolved into the massive Omni Bedford Springs Resort

A flood in 1983 caused significant damage to the property. After designation as a National Historic Landmark — and help from a state grant — the hotel, spa, and golf course were fully restored, remodeled, and reopened in 2007. Two years later, Omni Hotels & Resorts purchased the property.

“The $120 million restoration of a 2,000-acre property that spans four centuries has just completely changed the face of Bedford County,” says Bette Slayton of the Bedford County Development Association (BCDA). “Last year they had 100,000 visitors. During high season, they employ about 500 people with $15 million in payroll.”

Slayton knows all about transformation. She’s been in Bedford since 1984, when she was dragged, kicking and screaming, to small-town Pennsylvania by her new husband.

“Bedford was staid,” she recalls. “It was just a sleepy little town with not a lot to offer. We were dating in Kansas City and I said, ‘I’m not moving out there.’ There were no good restaurants, there was really nothing to do. But ultimately, I moved here because I loved him.”

An erstwhile banker, Slayton struggled for years to find an appealing job in Bedford before learning about economic development.

“We understand that location is important to people,” she explains. “Our location is excellent, being within close proximity to major metropolitan markets — a couple hours to Washington, D.C., and Baltimore; five hours to New York; less than two hours to Pittsburgh. We are at the crossroads of the Pennsylvania Turnpike and I-99.”

Thirty-six years later, her opinion of Bedford has flipped.

“I tell people, if Bedford County were a stock, you would want to invest in us,” she enthuses. “We’re on the move. The downtown has great restaurants and great shops. It’s really vibrant with lots of activities. People know each other. People are very friendly. People really cooperate and work together.”

The health of downtown and the recreation opportunities close at hand are among the reasons that REI chose Bedford (in addition to its logistical advantages.)

“We believe a life outdoors is a life well-lived,” explains Tina Molski, director of operations at the Bedford distribution center. “That means we want to ensure our employees have easy access to places to recreate outside. Bedford County affords our team a tremendous opportunity to get outside and play, from biking to paddling to skiing. We have great hiking trails and places to camp. There is opportunity to hunt and fish.”

The emphasis on outdoor recreation doesn’t stop with REI. Other recent additions to the county include River Mountain Retreat, a wellness-focused camp that empowers kids to disconnect from technology, and Kate’s Real Food. The 10-year-old company, which produces small-batch organic energy bars, was looking to relocate to a larger manufacturing facility. Bedford was the perfect fit.

While the company was founded in Jackson, Wyoming, and then moved over the Teton Pass to Victor, Idaho, it has strong roots in Central PA. CEO Bruce Thaler — along with his children Mark Thaler, executive vice president of operations, and Brittany Thaler, head of marketing — hails from Altoona, PA, just an hour north of Bedford.

“We were looking for somewhere less remote, close to major highways, and with a skilled labor force and infrastructure,” says Mark. “But it also has the mountain town vibe we are used to, and we feel like we can give back to the Central Pennsylvania area.”

In a town that attracts visitors from major metropolitan areas, there is also a culture that fits well with their company.

“We know it will be easy for us to find outdoor initiatives to sponsor and the kind of healthy-living, outdoor-lifestyle people who are drawn to our business,” he adds.

The new facility, located just one mile from REI’s massive distribution center, will enable Kate’s to increase production from 1 million bars to 12 million bars per year. The 20,000-square-foot factory will employ more than thirty people and boast excess capacity, allowing the company to take on co-packing contracts.

Recreation and industry produce jobs, which means more dollars circulating, which results in a fertile landscape for small businesses such as Next Door. With the closest Whole Foods a two-hour drive away, a specialty grocery like Wholesome Living Marketplace is also able to thrive. The store, which opened in 2008, stocks its shelves with organic and sustainably-produced items from small, family-owned companies and local farms.

In 2019, three new restaurants opened their doors in Bedford: Next Door, Evoke Bistro, an ingredient-driven French-American eatery, and TaCopacetic, a Mexican spot.

“There are some hidden gems,” adds Feaster. “A husband and wife team opened Cafe Donira, a little Russian BYOB restaurant. I love to go out there with friends. Another restaurant I like is called Horn O Plenty. Our little brewery in town, Olde Bedford Brewing Company, is great.”

Stacey Gould, Main Street Manager of Downtown Bedford, Inc., says part of what makes these businesses so successful is the willingness to form partnerships. 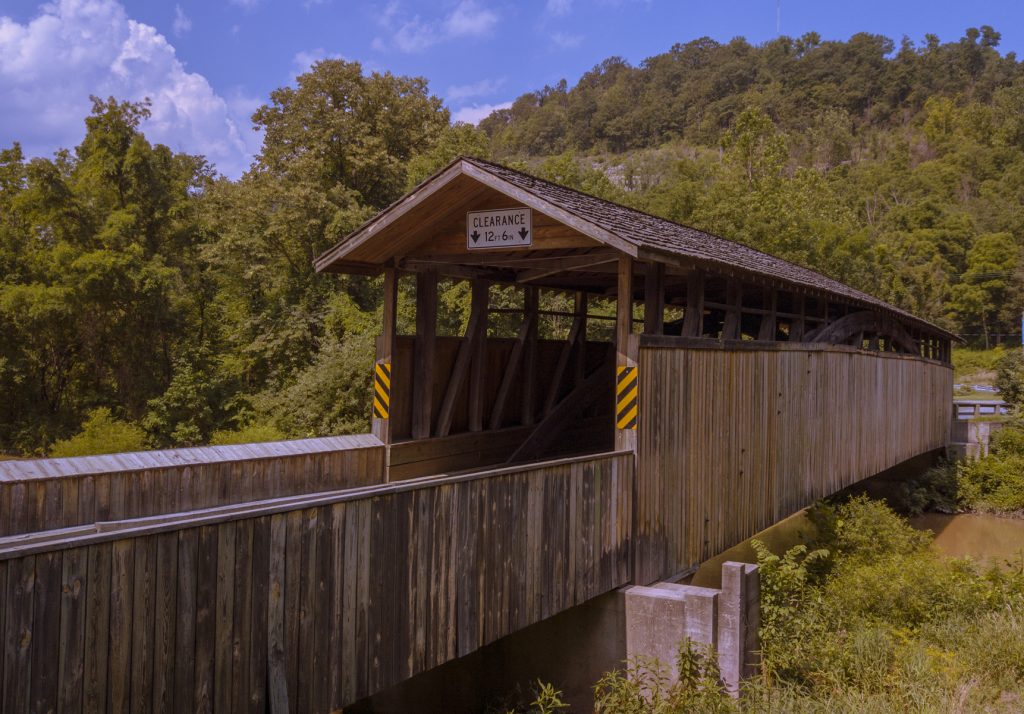 For instance, Dalesman Distillery & Brewery is slated to open next year. The distillery is renovating an old building downtown and will partner with two other local restaurants — 10/09 Kitchen and Nick’s Sandwich Company – to provide food.

With so many businesses opening and expanding, and young workers coming in to work at the resort, Gould says the main challenge is creating housing for a younger audience.

“We are looking at ways to develop these old historic homes to provide housing for young professionals coming into the area,” she says. “Young people want to be here and want to get established.”

Gould says it doesn’t hurt to have the kind of businesses that bring travelers long distances, like Mary’s Quilt Shop, which offers its own retreat center.

“People come far and wide for these unique businesses,” she says. “Then they see how great the town is and want to come back.”

“I’m super lucky to have grown up here,” adds Feaster. “The outdoor experiences are just endless. We’re surrounded by all these state parks. I love going out to the resort to hike. Mallory [Pachtman] and I are very excited to continue evolving our ideas in our hometown. We’re just so proud to be from here.”


A native Philadelphian, Lee is editor in chief of Keystone Edge, an online magazine focused on what's next and best in Pennsylvania. Her writing has appeared in the Nashville Scene, Philadelphia City Paper, Phillymag.com, AV Club, Magnet magazine, Grid Magazine, Flying Kite Media, and more. Come to her for tips on local eats, Pennsylvania wines, and the best podcasts for long drives.