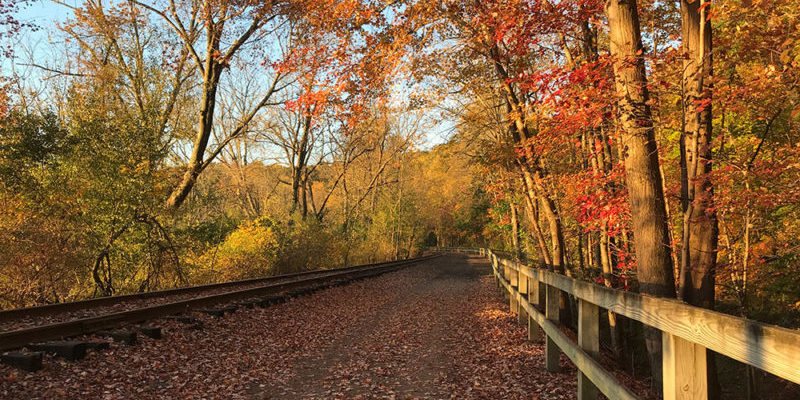 To really appreciate the beauty and diversity of Pennsylvania, ditch the highway and head to your nearest car-free trail.

Thanks to its early industrial prowess, Pennsylvania is filled with railroad tracks, many of them now ready to transition to serve new purposes. Many of those train tracks have become important recreational assets:  the state currently boasts 183 rail trails — mixed-use recreation paths fashioned from former lines — which add up to 1,910 miles. These paths have practical value as transportation thoroughfares and recreation spaces, but also intangible value as points of pride and connection. Here’s a spotlight on one specific PA rail trail and how it boosts the local community.

“It’s a great alternative to running on the streets,” he says. “The trail offers lots of trailhead parking lots and is loaded with scenic areas. In the summer heat, many areas of the trail are shaded, and the wooded setting means users are sheltered from strong winds.”

Bisecting York County, the Northern Central Railway went from vital transportation link in the 19th-century to an abandoned and unused corridor in the 20th. At least until 1999, when 18.5 miles along the tracks were transformed into the Heritage Rail Trail County Park.

Today, the Heritage Rail Trail — 21.5 miles and growing — is a major community asset, used year-round for recreation, transportation, health and fitness, history and nature education, and more. It links 11 municipalities, including the historic district of downtown York, and connects to an additional 21 miles of trail south of the Maryland state line, aka the Mason-Dixon line.

Silas Chamberlin, vice president of Economic and Community Development for the York County Economic Alliance, is also an avid trail user, and was recently appointed to the York County Rail Trail Authority.

“Access to trails is absolutely crucial to quality of life in York County,” he adds. “Trails provide access to open space, close-to-home recreation, alternative transportation, corridor conservation, and so many other great things to a community.”

Among those is economic growth. A 2017 report found an estimated 263,856 annual visits to the park, resulting in a total influx of between $3.5 and $4.4 million into the local economy.

“I see the York Heritage Rail Trail and other county trails as a platform for economic development, business growth, workforce recruitment and tourism,” says Chamberlin. “I also find a sense of pride that York County has an asset like the trail. It sends a message that we ‘get it’ in York County — we know trails are important, and we have invested the resources to create them and care for them.”

In his off time, Chamberlin, 36, explores the trail with his six-year-old daughter, two-year-old son and dog Ben (named for Benton MacKaye, the visionary of the Appalachian Trail).

“Since I am typically walking with a young child, we do not cover lengthy portions of the trail, but we are slowly walking short sections with the goal of walking the whole trail over time,” he says. “We enjoy seeing birds and other wildlife along the way, and there are enough historical sites and other points of interest to keep the kids wanting to walk just a little bit further to see what is around the next bend. For me, it’s a time to connect with my kids and disconnect from everything else.”

The York County Rail Trail Authority was established in 1990 with the mission of developing trails for recreation and non-motorized transportation. Its first project was to build the Heritage Rail Trail after acquiring 18.5 miles of disused Northern Central Railway railbed. Since then, the trail has been extended three times. A May ribbon cutting is expected for a new, six-mile extension to the north that will connect the trail to the John C. Rudy County Park. Another extension, scheduled for completion next year, will connect the northern section to the Colonial Court House in York.

“The Heritage Rail Trail County Park connects communities,” adds Mark Walters, York County’s public information officer. “It passes a college, an urban area, small towns and rural landscapes. It gives cyclists, walkers, joggers, runners, hikers, bird watchers, scenery photographers, and other outdoor enthusiasts a place to use at their leisure. It’s an invaluable asset to York County, not only because of its beauty but also its practicality.”

The route has a rich history. The Northern Central Railway was completed in 1858, and, according to the Authority, quickly became “a prime target for the Confederate Army before the Battle of Gettysburg. Rebel troops cut telegraph wires and destroyed bridges in their efforts to isolate Washington D.C. from the rest of the Union.” President Lincoln stopped at Hanover Junction while traveling to Gettysburg to deliver the Gettysburg Address. A few years later, his funeral train passed through again.

That restored station, along with the New Freedom Railroad Station, the Howard Tunnel, and four bridges, are among the historic sites along the trail; the two stations operate as historical museums and are open seasonally. For railroad enthusiasts, the Steam into History excursion train operates between the stations.

The community-building aspects of the trail inspire both Chamberlin and Kempf.

“Many of our smaller communities lack accessible public space, and the trail has become a 21st century town square where you can run into friends and neighbors or connect with a stranger over shared appreciation for the trail,” says Chamberlin.

“All sectors of the population can be found using the trail, from babies in strollers, to teens running with a school team, to adults of every age biking, walking, or running,” he says. “In 20 years of using the trail, I’ve never experienced a rude act, let alone any hostility. It’s a great resource.”

Elise Vider is the principal of Elise Vider Editorial Services LLC, which serves as an editorial consultant to a wide range of clients, many of them working on behalf of economic development and urban design excellence in Pennsylvania. She holds the position of news editor at Keystone Edge, and other clients include the Building Industry of Philadelphia, the University City Science Center, the Urban Land Institute, the City of Philadelphia and the University of Pennsylvania. Vider is also a founder and chair of Philadelphia’s Design Advocacy Group (DAG); Mayor Jim Kenney recently appointed her to serve on the city’s Civic Design Review Committee.