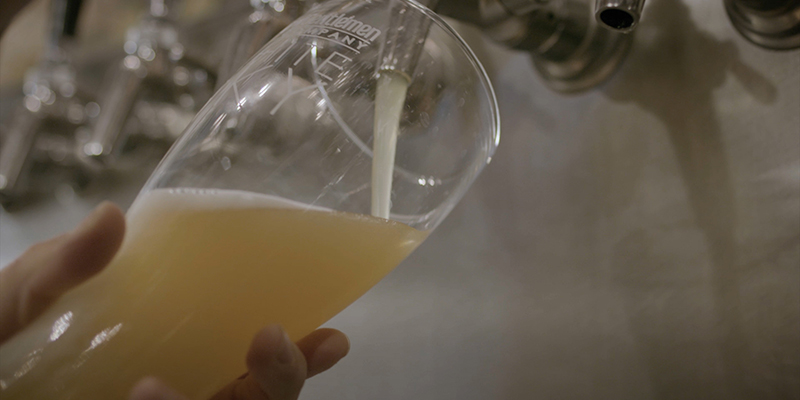 Part I: There’s Nothing More Can-Do Than PA’s Beer History

There’s a quote too often cited that Benjamin Franklin never said, so let’s steal and update it: Beer is proof that God loves Pennsylvania and wants people here to be happy.

The state has a beer history that started before Ben was born, a beer present that ranks it the No. 2 beer-producing state in the nation, and a beer future that looks to get only bigger and more Pennsylvanian.

Pennsylvania’s beer tradition started in the 1680s when William Penn arrived to this land England had granted him, gifted the indigenous people at least one barrel of beer, and began building an estate that would include a brewery. There’s nothing more can-do than how Pennsylvanians built a cutting-edge brewing industry out of wilderness nearly three centuries before pull-tab beer cans.

Many of his neighbors in Philadelphia had their own malt houses and brewing boomed there. A duty on imported hops, interestingly, encouraged colonists to grow their own. (More on that later.)

The “A History of Beer in Pennsylvania” video produced by Brew: The Museum of Beer, a national museum that aims to open in Pittsburgh (more on that later, too), points out that the first brewery west of the Allegheny Mountains fired up in 1765 at Fort Pitt. That beer was, like the soldiers who drank it, British — ale brewed quickly and at warm temperatures with top-fermenting yeast. The first brewer to bring to Pennsylvania from Germany bottom-fermenting lager yeast, for making beer more slowly and at colder temperatures, was John Wagner. A blue historical marker in Philadelphia immortalizes him for making “America’s First Lager.”

Lighter lager beer was what wet America’s whistle and Pennsylvania breweries that brewed it grew into the country’s largest, including D.G. Yuengling & Son in Pottsville, which opened in 1829. It survived 13 years of Prohibition — a lot of breweries did not — and is today America’s oldest brewery. Celebrating its 190th anniversary this year, it’s open for tours and purchases.

Some of the state’s regional breweries went on to survive and innovate, such as St. Mary’s Straub Brewery, where since 1872 visitors have been able to pour a free beer from the Eternal Tap, and Pittsburgh Brewing Co., which in 1962 pioneered the — pffffTT! — pull-tab beer can.

But other Pennsylvania breweries that were household names — Ortleib’s, Schmidt’s of Philadelphia — closed as big national breweries consolidated the business of supplying the same style of lager to all the country’s beer drinkers.

The 1980s began with fewer than 100 breweries in the U.S. But then, a strange thing began to happen, just as it had 200 years earlier: Many “microbreweries” began starting up in garages and storefronts, making small, all-malt batches of a variety of styles of ales and other brews.

Pennsylvania had some of the country’s first microbreweries, as Dock Street Brewing Co. opened in 1985 in Philadelphia, where Pittsburgh’s Pennsylvania Pilsner launched in 1986, and Stoudt’s Brewing opened in Adamstown in 1987.

And by the 1990s and early 2000s, as craft breweries surged, some of the biggest and best-known were in Pennsylvania. In 2018, the Brewers Association trade group’s top 50 included No. 1 Yuengling, No. 11 Artisanal Brewing Ventures (that includes big-on-its own Victory Brewing of Downington) and No. 27 Tröegs of Hershey. You can tour, and eat and drink, at Victory and Tröegs, too.

Next: Part II – The present is even better.