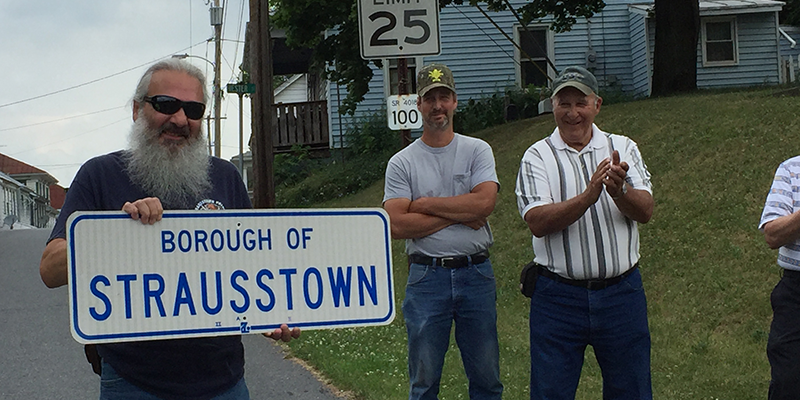 The Village of Strausstown: Government Collaboration at Its Finest

In 2014, Strausstown Borough in Berks County was facing several major issues. In order to eliminate budget deficits, it was forced to raise real estate taxes and sewer fees by more than 30 percent. Additionally, Borough Council’s part-time staff was struggling to manage many full-time services, including street lights, trash collection, municipal issues, and the sewer system. We spoke to Paul Janssen, Director of Albright College’s Center for Excellence in Local Government, about the situation and its ultimate solution — a municipal merger — and the governmental cooperation that led there.

The Need for Change

According to Paul Janssen, the Strausstown Borough had a bleak outlook just a few years ago, facing a myriad of issues related to debt, high taxes, and contaminated water wells. The Borough couldn’t afford its street lights and trash collection, especially with an eight-hour-per-week Municipal Secretary. Finally, housing resales stopped because nobody had clean water.

“Strausstown was a little borough with 300 people — Borough employees were part-time but had full-time problems,” Janssen said. “Residents had wells and were using cesspools for their sewer. Very quickly their water tables got contaminated. They ended up with a new sewer plant, $97 monthly fees, and a full-time operation.”

The Borough’s taxes were more than three times those of Upper Tulpehocken Township’s, and it had limited staff with limited hours to offer services.

“To its credit, the Borough was trying to figure out if they should be talking to the Township about becoming a part of the Township, and providing for better management and oversight by a Board of Supervisors who had a lot more money and people — and also the ability to manage it better,” Janssen said.

Working Together to Join Together

In November 2014, Strausstown Borough Council President George Brown presented the idea of a merger to the Upper Tulpehocken Township Board of Supervisors. The merger would combine both entities into one municipality.

While met with initial skepticism by Upper Tulpehocken residents, who viewed the Borough as broke and unable to manage itself correctly, a merger committee was formed to conduct extensive research of resident concerns, which comprised volunteers from both municipalities. Identifying a lack of public education as a big part of the community’s negative reception, committee members — in conjunction with The Center for Excellence in Local Government (CELG) at Albright College — executed a widespread outreach campaign, distributing handouts and brochures, attending community events, and going door-to-door to answer residents’ questions.

CELG facilitated the ongoing discussion, Janssen said — not making recommendations, but presenting every issue and explaining the different forms of government and alternatives for taxes, funding, and service delivery.

During the 16-month review period, attendance at Township meetings went through the roof. The typical 20 to 25-person attendance quickly ballooned to 40 to 50 when the consolidation started.

“Now, people were seeing how budgets are developed, where the money is being spent, what the potentials are for what can happen,” Janssen said. “There was a lot of trust among the people. It was a very open and transparent discussion.”

Ultimately, the committee’s recommendation was that the consolidation be put on the April 2016 Primary ballot. In contrast to the Township’s initial reaction, both the Township and the Borough passed the referendum overwhelmingly. Strausstown Borough would officially become part of Upper Tulpehocken Township, marking the fourth successful municipal consolidation in Berks County.

The consolidation was funded with assistance from the Berks County Commissioners and the Pennsylvania Department of Community and Economic Development (DCED), who funded an Strategic Management Planning Program.

The successful merger, creating the Village of Strausstown, had a multitude of benefits for citizens, including continuation of all municipal services in both communities, expanded township administrative hours, a 40 percent tax reduction for former Borough residents, and a net annual funding increase of $47,500 for the Township — effectively stalling any imminent tax increase and assigning money to a long-term plan for road maintenance and reconstruction.

“The whole thing ended with a lot of taxes cut, but additional revenues gained, along with better services,” Janssen said.

On July 1, 2016, officials held a ceremony in the former Borough, where they removed the Borough of Strausstown signs and replaced them with Village of Strausstown signs. And on March 30, 2017, both original municipalities were recognized for the manner in which they implemented the merger, earning the 2017 Richard C. Trostle Intergovernmental Cooperation Award. The Center for Excellence in Local Government at Albright College presented the award at the annual Public Officials Dinner at the Reading Country Club. 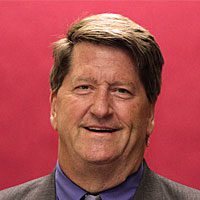 Paul Janssen has served as Director of the Center for Excellence in Local Government since August 2012. Janssen holds a bachelor’s degree in political science from Bloomsburg University and a master’s in public administration from The American University. Prior to coming to the Center, he was a township or city manager for more than 25 years in four Pennsylvania municipalities. Paul also served as a consultant to local government and nonprofits over the past six years, including a 30-month commitment as an interim Borough Manager. Additionally, he has served as the Coordinator for the Consortium of Communities for Montgomery and Chester County.