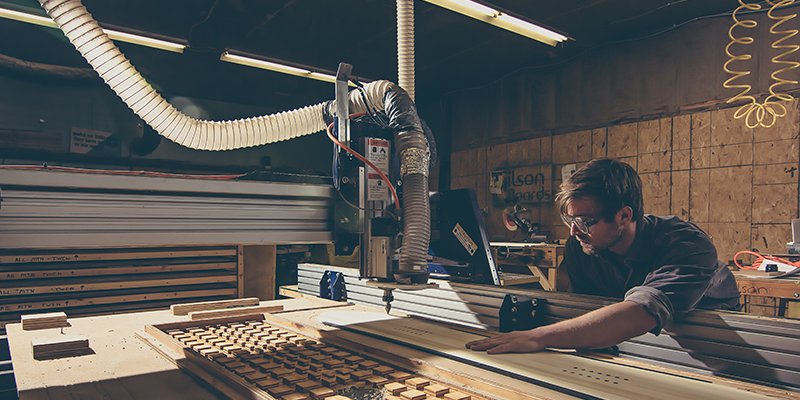 Founded in 2013 by Nicholas Gilson, Austin Royer and Adam Vanderhyden, Gilson Boards is based in Winfield, Pa., operating from the Gilson Snowboard Farm in the Appalachian Foothills. The artisan snowboard manufacturing company locally sources its hardwoods from sustainably harvested poplar trees 15 minutes from the snowboard farm. The company prides itself on building high-quality snowboards for men and women. Gilson recently was featured on NPR’s “How I Built This” podcast.

In my experience, the greatest opportunities in life are found during times of failure.

And I’ve learned – from our roots in a Pennsylvania donkey stable to our state-of-the-art manufacturing facility – that the greatest hardwoods and some of the most supportive communities are found in the Keystone State.

Years ago, my father was building an ultralight 16-foot catamaran sailboat, crafting each hull from thin sheets of wood glued to the ribs of a curved wooden frame. Every detail of the shape was purposeful.

I began to build a crude snowboard prototype modeled off my father’s design. It was made from the same thin wooden sheets pressed between two doors. The board worked, but I was 14, biased, and I’m the only one who rode it. I constructed my first board at the age of 14, based off an ultralight sailboat design of my father’s.

Fast forward almost a decade, I graduated from Johns Hopkins University in 2011 with a degree in Earth & Planetary Sciences and a minor in Economics and moved to Nashville, Tn., after graduation with Teach For America as a science teacher.

Down the hall from my classroom, Austin Royer, a recent Susquehanna University grad, moved into the other science classroom.

We were faced with a big problem: most students were performing at 18 percent proficiency, but some students were far ahead. We were failing to reach all our students at the same time, and so we gambled on an idea that incorporated class unity and hands-on learning that would relay problem-solving mindsets and skills to our students: a year-long project of their choosing. In an act of solidarity, Austin and I announced that we would be doing our own year-long lab project, and began to revisit the snowboard concept I had explored when I was their age.

Austin began designing the first generation of what would become a revolutionary pressing system, and I focused on fluid dynamics.

Three months later, we had our first snowboard. We traveled to Colorado to test the concept and collect data to analyze with our students. Austin described it as “trying to ride a canoe down the mountain” — it totally failed.

It was that failure that led to the creation of the Soft Edge — a reactionary design that today is the feature that our community appreciates most.

Inadvertently, we were teaching what failure looks and feels like, and how it can be the most important moment for opportunity. We believe the fear of failure squashes creativity.

By the end of that year, we had built the foundation for a company, and our students’ proficiency grew from 18 percent to 89 percent. The science program went from being unranked to being in the top four in the district.

We resolved to form a company. We moved to Austin’s parents’ farm in Central Pennsylvania and began to build a shop in a donkey and horse stable. We lived in a cabin in the woods with no running water or electricity, but found the most supportive and embracing community, not to mention access to some of the most talented craftsmen and beautiful hardwoods.

Without our Pennsylvania neighbors, we wouldn’t be here. Our first presses were welded by an expert in return for cutting his firewood, saving us thousands of dollars we didn’t have. Stanley Woodworking and Springlake Forest Products are two local businesses that glue and prep our wood cores before we craft them into snowboards.

Since our first winter tour in 2013, we’ve been growing exponentially. We outgrew the stable, and we purchased a property a half a mile down the road in the Appalachian Foothills. This piece of land has affectionately come to be known as The Snowboard Farm.

For a time, we lived in the manufacturing facility with blurred lines between work and play — building our machines and advancing our operation.

While we travel a lot, we call this place in Central PA home – and we don’t plan to leave.

Today, some say we build the most advanced skis and snowboards in the world, and Outside Magazine recently ranked us a top American brand and in 2015, we took home the Ben Franklin Venture Idol for our snowboard’s base that is a three-dimensional design that is faster, stronger and more flexible than traditional products. We’re living and working in PA, and we love to spend time in the Poconos. 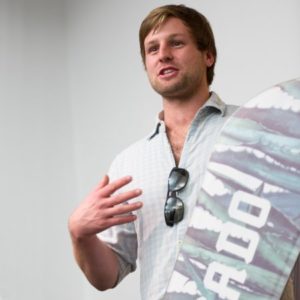 Nicholas Gilson, CEO of Gilson Boards, wasn’t satisfied with the current production and advancement of snowboarding technologies, so he took matters into his own hands. At the age of 14, he started creating his own snowboards based off the work he did building boats with his father. Ten years later, he came into contact with his co-founder, Austin Royer. Gilson Boards began in 2013, and the rest is history.