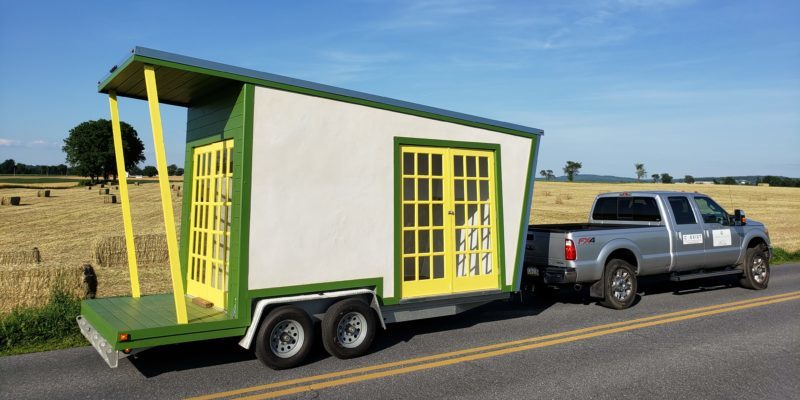 Hemp House on Wheels, mentioned in the story, courtesy of Cameron McInstosh

Industrial hemp production was legalized by the 2018 Farm Bill, and since then more than 500 Pennsylvania farmers have obtained permits to grow the crop. For many, hemp represents hope, not only for reviving small farms, but for creating a new business sector and even combatting climate change.

It’s a heavy burden to put on a plant, but hemp, a sturdy variety of the cannabis sativa species, can bear it. In fact, it could be called a miracle plant. Hemp can be used to manufacture more than 2,000 products: the seeds for food, the cannabidiol (CBD) chemical component for healing, the stalk’s bark for bast fiber, the woody inner “hurd” for building materials and the automotive industry. (Hemp only contains a miniscule amount of tetrahydrocannabinol, or THC, the element in the marijuana variety that gets you high.)

It’s also a fast-growing crop that enriches rather than depletes the soil, and it has many sustainable properties when used in building or to replace plastics. All that is good news.

While the atmosphere at the Hemp Summit was buoyant, there were some words of caution in lectures by experts from Canada and the Netherlands, where the hemp industry has been well established for more than 20 years.

Jan Slaski, Ph.D., a principal researcher in plant sciences for InnoTech of Alberta, Canada, and director of the Canadian Hemp Trade Alliance, warned the attendees not to “put all your eggs in one CBD basket.”

He was talking about the fact that most (about 75 percent) of the permitted farmers have been growing hemp specifically for extracting CBD because of all the publicity about this chemical. But time will tell whether the high demand for this product will continue or turn out to be a bubble that bursts in a few years.

According to Slaski, in Canada, the hemp industry is promoting “whole crop utilization.” They started by growing shorter hemp for the seeds, then added tall hemp with high stem yield for fiber used in car parts, construction, and clothing. Only now are they growing high-CBD varieties for research purposes.

Mark Reinders, CEO of HempFlax in the Netherlands, a 25-year-old company, echoed Slaski in advocating the “total crop” approach. (He appeared at the conference via Skype.) HempFlax has six business lines for the 3,500 acres of hemp it contracts per year: genetics and cultivation; industrial applications, nutraceuticals, animal care, construction, and horticulture.

When Oude Pekela founded the company, hemp had been prohibited in the Netherlands for 50 years. They had to experiment with harvesting and processing equipment, modifying machines used for flax. They now sell harvesting technology throughout the world.

He said there is a lot of interest in CBD, but “too many people are jumping on it; there will be disillusionment as the profit margins are dropping.” He feels there is a big future in hemp-based textiles, as research is underway on processing the fiber to the requisite softness to replace soil-draining cotton.

HempTrain to the Rescue in York County

GNA has contracted 2,000 acres of fiber hemp from local farmers, and in August 2019, Groff announced that the company was acquiring Canadian Greenfield Technologies, a hemp processing machine manufacturer based in Calgary, Alberta. In addition, one of Canadian Greenfield’s cutting-edge HempTrains is being placed in the Red Lion facility, making it the only hemp-processing center in the country. 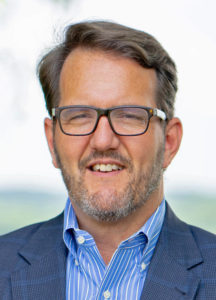 “Our vision is to build a company that’s knowledgeable and experienced in cannabinoid extraction and whole-plant use,” says Groff. He was just returning from a visit to Kentucky, where another hemp-processing company had shut its doors because “it got in a little too early and ran out of capital.”

“Now there’s momentum in hemp,” he adds. “So this will put us out in front as leaders in processing and technology.”

The HempTrain can process 2,000 pounds of hemp per hour, opening the square or round bales and separating the hemp into the bast fiber, hurd fiber and clean green microfiber. This process, called decortication, is one of the key requirements for creating a supply chain for hemp.

Groff said GNA will be adding machinery capable of further refining the fiber for use in specialty high-value products, ensuring that startups can get the supplies they need locally.

From Processor to Manufacturer

One business owner who will welcome having local access to a state-of-the-art hemp processor is Cameron McIntosh, who founded Americhanvre (“chanvre” is hemp in French) in Wescosville, Lehigh County. The company is manufacturing large planters for urban gardens made of hempcrete. The material was pioneered in France as a method to repair deteriorated wattle-and-daub filler in medieval half-timbered buildings. 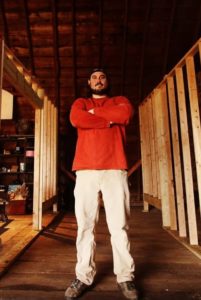 McIntosh, a ceramicist, has designed a series of these planters, incorporating handmade ceramic tiles, to be filled with native pollinator plants. He is testing them for weather-resistance before marketing them for urban gardens; at present he sells them for indoor spaces on a limited basis.

While researching the planters, he discovered that hempcrete, when coated with a mixture of lime, sand and water, makes an excellent building material — there are houses built with it all over Europe. It can be used to replace vinyl siding, insulation and drywall in wood-frame houses, with many advantages over those materials.

Hempcrete is non-toxic, renewable, biodegradable, and nearly fireproof—it doesn’t smoke if lit, and doesn’t ignite. The hurd used in hempcrete also traps carbon; when placed into a wall, it is carbon-negative. It’s mold-, mildew- and pest-resistant. It retains heat longer, saving on heating costs. And because it “breathes,” a hempcrete wall can regulate the humidity in a home’s interior.

Because of a lack of building codes and standards related to hempcrete, the material can’t yet be used in new construction in Pennsylvania. The newly formed U.S. Hemp Builders Association, which held its first summit in Idaho in October 2019, will be working to fast-track legislation. That includes HR 3652, “Hemp for Victory Act,” introduced in July 2019.

McIntosh took a workshop on installing hempcrete insulation at LimeWorks.us in Bucks County and has become a licensed installer. He also partnered with Coexist Build in Blandon, Berks County, a green architectural firm owned by Drew Oberholtzer and architect Anastasiya Konopitskaya, to create a “Hemp House on Wheels,” an 8-by-14-foot model house made of wood frame and hempcrete, mounted on a truck. They have taken it to conventions, including the Farm Progress Show in Decatur, Ill. and the Cannabis World Congress and Business Expo in New York City, and other events, demonstrating that hempcrete is compatible with modern design.

Putting It All Together

Connecting farmers with firms like Groff North America and Americhanvre is the key to building the hemp industry in Pennsylvania. That is exactly what the recently formed Hemp Local Supply Chain Coalition is aiming to do. 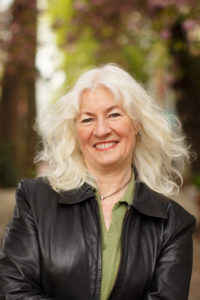 Judy Wicks, founder of All Together Now and the PA Hemp Supply Chain Coalition

The HLSCC is one of six such coalitions within All Together Now, a nonprofit founded by Judy Wicks, the author, activist and entrepreneur who launched the farm-to-table restaurant White Dog Café in Philadelphia in 1983. She also founded the Sustainable Business Network of Greater Philadelphia, the Business Alliance for Local Living Economies and now-defunct Fair Food Philly.

Wicks, who spoke at the Hemp Summit’s afternoon investment session, said that in order for the hemp industry in PA to succeed, farmers must be connected with processors, entrepreneurs, and local markets. She emphasized that local self-sufficiency and sustainability are crucial to the success of this fledgling industry.

“We have an opportunity to mold this in the way we want,” she said.

The coalition’s growing membership includes farmers, entrepreneurs, researchers, investors, advocates and policy makers, including McIntosh, Oberholtzer and Konopitskaya. ATN convenes and advises a legislative working group made up of PA senators and representatives who advocate for sustainable businesses, including but not restricted to hemp.

“We must work together to build resilient, self-reliant regional economies,” said Wicks. “[They will] produce basic needs locally in order to move wealth from distant corporations to our communities, cut down on the carbons of long-distance shipping, decrease our dependency on global supply chains, and prepare our communities to withstand the effects of climate change.

“Community self-reliance is the meeting place of the political left and right,” she adds. “The right has long valued self-reliance, and the left, community. Put the two together and it’s not far to move either side.”

SUSAN L. PENA is a freelance writer living in Berks County. She writes regularly on arts and business for the Reading Eagle and has contributed to several other publications including the Eastern Pennsylvania Business Journal and Keystone Edge.

The Keystone State’s next generation of queer leaders
Part III: The Future of Beer in PA is Already in the Works
From Factories to Small-town Storefronts, Historic PA Buildings Transform with the Times
Move Over, Silicon Valley – Pennsylvania is On the Rise
Drexel Knits New Layer of Advanced Manufacturing
PA is Taking Video Game Development to the Next Level